Public funding has always been scarce and intermittent, and our school has always relied on the support of NGOs and private institutions. Outside Brazil, donors are mainly located in Italy – given that PIME, the founder, is an Italian based congregation – with relationships established since the foundation of the school.

The longest lasting relationship is with AVSI. For 30 years, AVSI has helped with the reform of the dorms, runs the distance adoption program for the elementary school students (many of whom come from poor families who have serious financial difficulties including buying school supplies). Recently, it was through AVSI that Philips built the solar lighting system for the soccer and volleyball fields.
In the last 20 years, the Swiss NGO AVAID contributed to the development of the school with various interventions involving several (Swiss) donors: from the construction of wells (1999-2000) to the recent irrigation system (2017) thanks to Lanteriama and the Mondini family, from the agro-industrial program with the Accentus Foundation (2002) which provided direct support to the educational work (2016), to the rehabilitation of the stables with the Foundations Del Don and Ceresio (2018-19).
The NGO Amazzonia Sviluppo of Modena, in Northern Italy, has also been supporting the school since 2006. At times the support is with targeted projects such as a pisciculture experiment or with construction and renovation, through the donation of equipment, such as a CNH tractor. In several cases, it supported the school’s short-term needs with unrestricted donations.
Individuals also give us support. From the early years: some friends of Milan in particular Eugenia and Giuliano Colombo who financed the construction of the chapel/auditorium in memory of their daughter Anna; Francesca and Enrico Imbasciati who supported the school in memory of their son Pietro; all have never failed to make their presence felt. In addition, support is received from the Missionary Group of Olle (Trento, Italy) and, more recently, the Gonzalo Association of Turin.

In Brazil the support of Mesa Brasil and Gruppo Frigorifico Vitello stand out, which offers food, and the Importadora Tropical, that supplies recyclable materials. 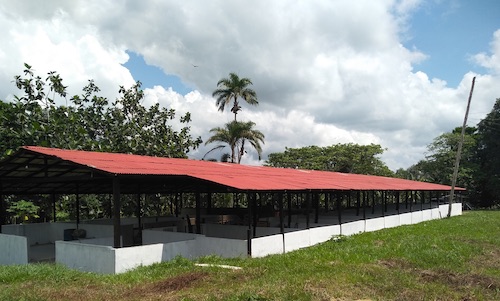 The stables, renovated with the support of AVAID